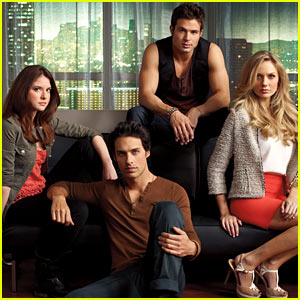 Check out these exclusive first look pics from the upcoming Nick at Night show Hollywood Heights!

James Franco will also be joining the cast of the show for a multi-episode arc as Osborne “Oz” Silver, a passionate, intense eccentric movie mogul!

Here’s a synopsis: Loren Tate (Underwood), a shy teen whose musical aspirations inch closer to reality when she wins a songwriting contest for Eddie Duran (Longo), a rock star at the top of his game. Loren finds the support system she needs in her single mom, Nora (Williamson), as Nora returns to the dating scene for the first time in years. Meanwhile Eddie’s unbreakable bond with his father, Max (Ponce) – strengthened by family tragedy – is challenged by Eddie’s budding romance with a beautiful, but manipulative aspiring actress, Chloe Carter (Ordway). As Loren begins a meteoric rise on the music scene and Eddie’s star begins to fade, together they learn that the road to love and stardom often carries a heavy price tag.

Hollywood Heights will premiere on Nickelodeon this June. Be sure to tune in!

This website uses cookies to improve your experience while you navigate through the website. Out of these, the cookies that are categorized as necessary are stored on your browser as they are essential for the working of basic functionalities of the website. We also use third-party cookies that help us analyze and understand how you use this website. These cookies will be stored in your browser only with your consent. You also have the option to opt-out of these cookies. But opting out of some of these cookies may affect your browsing experience.
Necessary Always Enabled
Necessary cookies are absolutely essential for the website to function properly. This category only includes cookies that ensures basic functionalities and security features of the website. These cookies do not store any personal information.
Non-necessary
Any cookies that may not be particularly necessary for the website to function and is used specifically to collect user personal data via analytics, ads, other embedded contents are termed as non-necessary cookies. It is mandatory to procure user consent prior to running these cookies on your website.
SAVE & ACCEPT